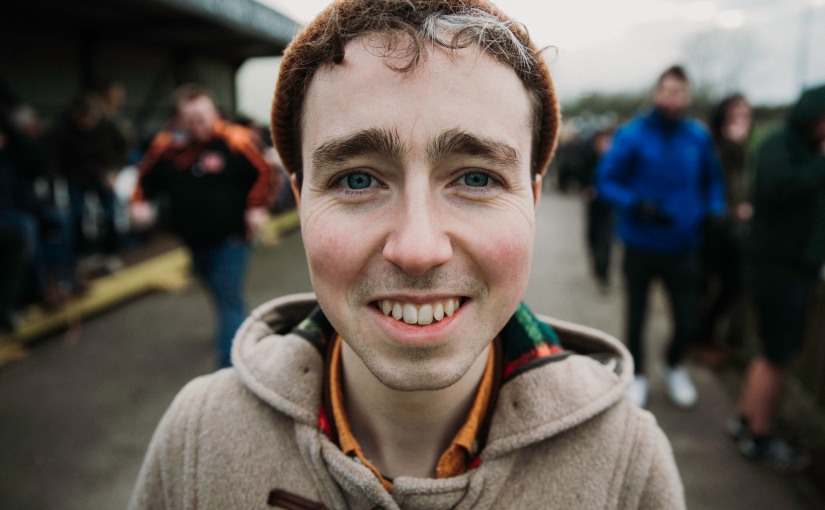 Yesterday I attended a football match as part of my project of documenting the people of football and exploring the spaces where non commercialised football takes place. As a result of my experience which took place in Chorlton, a Manchester superb which is a progressive area with a large young population of young professionals. I was unsure whether their interest would extend to the local football team. My preconceptions were that the local football team was far too uncool for them… I was wrong.

I found myself surrounded by a vibrant community which had decided that it would refuse a partisan approach often seen at football matches in favour of a community approach which celebrates its progressive nature. Singing songs about keenwah and hummus and not eating meat.

In response to my observations and with my approach in mind (which was to produce some powerful portraits) the overriding emotion I felt after leaving was one of hope. When reviewing my work from the day I decided to work on the portrait below with the intention of conveying a reading of hope. I did this through colour grading in addition to manipulating the subjects eyes by adding some colour with the intention of emphasising a message which conveyed a sense of activism against the partisan nature of football. Football as a metaphor for war, this is not.

Szarkowski (1976) emphasises that ‘photography is a system of visual editing… it is a matter of choosing from among given possibilities, but in the case of photography the number of possibilities in not finite but infinite’. With the ideas of (Szarkowski 1976) in mind and considering the image I made. I did so as a result of my experience, what I saw, who I met and the emotions that were invoked. As a result, I chose to select this picture which I purposely had the intention of shooting close, I was drawn to him as he didn’t look like a football fan yet he was at a football match. I observed before I approached him, his popularity and friendly demean, and chose to select him as a target to focus upon.

This is relevant as I was at a football match with hundreds of people in attendance with millions of potential representation with the potential for meaning yet I selected this photograph to make in order to convey the sense of hope that I highlighted earlier which in this case confirm the assertion of Szarkowski regarding infinite possibilities.

Whilst editing the photograph, with the message of ‘hope’ in mind I chose to enhance the reality and emotion I felt using the eyes as a vehicle for meaning. As Christopher Stewart (2002) did in his photograph of the man looking out of the window from his project insecurity. I chose to enhance specific areas of the photograph with the intention of furthering the impact on the viewer. In engaging with this approach I may be reducing the authenticity of the photograph intentionally which moves the photograph further away from reality which (Grundberg 1989) may confirm in suggesting that photographic images can be tricksters and often mistaken for the real thing. With this in mind, the work I have produced isn’t pure fiction but a relationship between reality and the hyper real. Thus moving away from the mechanical model towards the visual model in order to further the meaning.

Photographer based in Stockport, England. This website is for the purpose of my personal work, currently studying MA Photography at Falmouth University. View all posts by drewfindlay82